For the fourth week in a row, the big picture continues to be very positive. On the medical front, all three major data series—new cases, positive testing rates, and hospitalizations—have continued to trend down, while vaccinations continue to scale up. If these trends persist, we are through the worst of the pandemic and should see further improvement.

While the trends are positive, the remaining significant risk is that a more contagious variant of the virus could accelerate infection growth, as it has in other countries. Offsetting that risk is the progress in vaccinations, which continues to rise substantially. The risk of a new variant is real, but as of right now, we do appear to be through the worst of it, and there is a real possibility of continued rapid improvement.

The economic news is showing surprising strength, although there are still signs of weakness. The federal stimulus bill has improved both confidence and spending, with retail spending up well above expectations last month. Further, medical improvements are allowing reopenings in many states. Job growth in January was positive, up from a decline in December, although it remains low, and layoffs are not yet declining significantly. While risks remain, between the medical improvements and the federal stimulus program, the economy also looks likely to be past the worst of the pandemic damage.

Overall, while the current headlines continue to show that real risks remain, there are signs of improvement and reasons to believe we may be past the worst of it. That continues to be what markets are thinking, as they have hit more all-time highs despite some turbulence. Let’s take a look at the details.

New cases per day. The most obvious metric for tracking the virus is daily new cases. Case growth has been dropping quickly for more than a month and is now at levels last seen in October and early November. The trend continues to be downward, although there is still a risk that a more infectious variant of the virus could push infection rates up again, as seen in other countries. While we need to keep an eye on that, so far at least the trend remains positive. Absent that risk, it looks like the third wave is now past.

Looking at the numbers, the improvement is clear. New daily infection rates were 71,640 on February 17, down from 98,402 a week earlier. The seven-day average number of new cases per day was 79,112, down from 106,155 a week ago. While case growth remains too high, the good news is that it is down significantly and the trend continues to be downward. If this trend holds, we are now past the peak of the third wave. 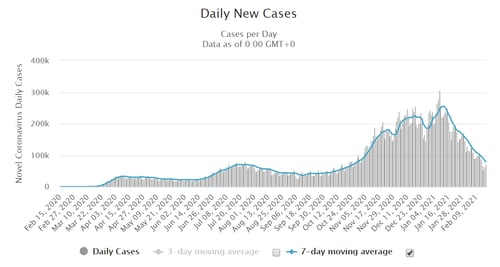 Hospitalizations. We also see the same trend with hospitalizations, which is even more encouraging. While case reporting has weaknesses in how the data is reported, hospitalizations are much better as a real-time indicator. Here, too, we can see a peak and decline. On February 17, there were 63,398 people hospitalized, down from 76,979 a week earlier. As a coincident indicator and as a better indicator of the stress on the health care system, this supports the idea that the trend has turned. 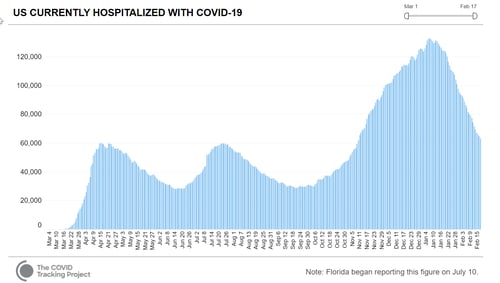 Testing news. The news on testing, however, is more mixed. While the positive rate continues to decline, we have also seen a decline in overall testing numbers. While daily testing remains at historically high levels, the decline is potentially a risk factor. Nonetheless, the continued decline in the positive testing rates is more supporting evidence for the change in trend and could be a leading indicator of further improvements. 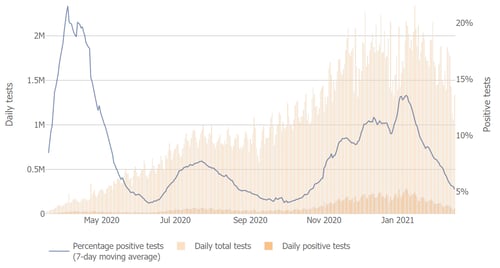 Vaccinations. Finally, we are now well into the vaccination process. More than 12 percent of the U.S. population has had at least the first shot of the vaccine, and this has very likely contributed to the positive change in trend in the other data series. While the trend has slowed in the past two days, this is likely weather related. Vaccinations are likely to accelerate in the coming weeks, which should drive further improvements. 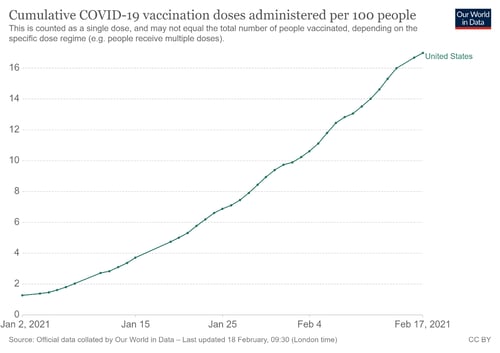 The major risk right is that a more contagious strain of the virus could take root and accelerate infections again. Here, too, we see no immediate signs of this, but evidence of these strains has now been reported in 35 states. So far, there has been limited spread, but this remains a very real risk.

The bottom line is that while infection growth is still too high, the data suggests that we are through the worst of it. Policy measures appear to have worked around the country, and the pending spring weather should also help. Absent spread of the more infectious strains of the virus, we are therefore likely to see more improvement in the next couple of weeks. As vaccine deployment accelerates, the downside risks will drop quickly. While the risks are real, so is the progress.

Jobs and consumers. While the backward-looking economic data remains soft, we are seeing improvement in more current indicators as a combination of medical improvement, slow reopening, and the federal stimulus helps employment and confidence. Job growth went positive again in January, after declines in December, although layoffs have ticked back up, suggesting there is still risk there. Confidence, however, seems to be bottoming. While the data is preliminary, the combination of a firming job market and stabilizing confidence appears to have started to grow consumer spending again, as shown by last month’s very strong retail sales report. With all of this, the data is showing we are likely through the worst of the economic impact of the pandemic. 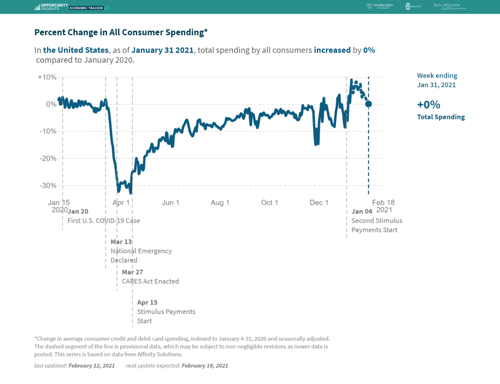 Business sector. This improvement is also what the business sector is expecting. Despite the slowing in the consumer economy, business confidence and investment hit new post-pandemic highs last month and remain above pre-pandemic levels.

With the improvements in hiring and spending, the consumer economy looks to be past the worst of it and set for further improvement in coming months. The business economy was already solid and looks to be improving even further. As the stress lifts, with the existing and prospective fiscal stimulus package, the medical improvements, and the acceleration in vaccine deployment, the economy now looks like it will keep growing as we are seeing consumer confidence and spending bounce back, as we saw after previous waves. While the risks are real, we now see most of the economic risks are moving behind us as well.

Markets continued to move toward all-time highs again. We did see some volatility, largely attributed to turbulence within the financial markets themselves. But this too represents progress, as the pandemic is no longer the determinative factor. Despite that turbulence, between the ongoing medical and economic improvements, markets continue to expect a much better 2021 and that has supported prices. Fourth-quarter earnings are coming in well ahead of expectations, and analysts are now adjusting their 2021 earnings estimates upwards, which suggests this positive trend might continue as well.

While risks remain, the data says we have moved beyond the third wave of the pandemic and that medical risks may be dropping. Similarly, while the economic damage has been real, with economies reopening and the federal stimulus supporting the most vulnerable parts of the economy, we are moving past the worst of it. The most likely case for the next couple of weeks appears to be continued improvement of the medical news and economic improvement as reopenings take effect. Markets will likely keep bouncing around on new developments, so expect more volatility in the short term.

In the longer term, the good news is that vaccines are now rolling out increasingly quickly. In a couple of months, we should be approaching the end of the pandemic when the economy can normalize and start to really grow again. Despite the real risks that still remain, we are making progress and at an accelerating rate.

The information on this website is intended for informational/educational purposes only and should not be construed as investment advice, a solicitation, or a recommendation to buy or sell any security or investment product. Please contact your financial professional for more information specific to your situation.

Certain sections of this commentary contain forward-looking statements that are based on our reasonable expectations, estimates, projections, and assumptions. Forward-looking statements are not guarantees of future performance and involve certain risks and uncertainties, which are difficult to predict. Past performance is not indicative of future results. Diversification does not assure a profit or protect against loss in declining markets.

The S&P 500 Index is a broad-based measurement of changes in stock market conditions based on the average performance of 500 widely held common stocks. All indices are unmanaged and investors cannot invest directly into an index.

Third party links are provided to you as a courtesy. We make no representation as to the completeness or accuracy of information provided at these websites. Information on such sites, including third party links contained within, should not be construed as an endorsement or adoption by Commonwealth of any kind. You should consult with a financial advisor regarding your specific situation.