On Friday, Brad McMillan provided an update on the coronavirus crisis, including the economic and market implications. Last week was another good week in terms of controlling the virus, with the daily spread rate dropping to less than 2 percent for five days in a row. Plus, testing increased to more than 300,000 tests per day, and the number of new cases per day continued to decline significantly. Similar progress was seen on the economic front. Layoffs continued, but millions of people have started to return to work—one of the positive effects of the reopening process. Of course, risks remain, with a second wave of infections looming the largest. But the foundation of the economy is starting to be rebuilt.

We saw continued and even accelerated progress on several fronts with the pandemic and are almost into phase 2. For the economy, the rolling reopening has also started to show some positive effects. Financial markets, on the other hand, have had some volatility as the prospect of reopening turns into reality. So, here we go.

Growth rate. I have changed the timeline here to reflect the past month, as that better illustrates the progress. You can see from the chart below that, in that time, the new case growth rate has declined from about 5 percent per day to the present level of less than 2 percent per day. Put another way, the number of new cases went from doubling in about two weeks a month ago to doubling in about seven weeks now. This shift represents significant improvement—we have succeeded in flattening the curve even further at a national level.

Daily testing rate. We have also made further progress on testing. The daily test rate is up from just about 150,000 per day in the middle of April to 300,000 per day and more in the past several days. While this level is still not where we need it to be, it represents real progress.

Positive test results. Another way of seeing this progress is to look at the percentage of each day’s tests that are positive. Ideally, this number would be low, as we want to be testing everyone and not just those who are obviously sick. The lower this number gets, the wider the testing is getting. Here again, we can see the positive level has halved from the peak. More people are getting tests, which means we have a better grasp of how the pandemic is spreading.

New cases per day. As a result of these positive developments, the improvement in new cases per day is also substantial, down from 30,000 to about 20,000. And this number is even better than it looks. With the wider range of testing and the number of tests doubling, other things being equal, we would expect reported cases to increase in proportion to the number of tests. In fact, we have seen the number of daily cases ebb and flow with the testing data. Overall, however, the trend is down.

We are getting close to controlling the coronavirus pandemic and even approaching a point where we can start to close it out. While we are not out of the woods yet, we are at the end of the beginning of the process—and moving in the right direction.

Economic Damage May Have Already Peaked

Job market. While layoffs continue, there are signs that the damage may have peaked and has started to recede. Weekly initial unemployment claims continue to decline from the peak, suggesting that much of the damage has already been done.

Even better news is that the continuing claims number (i.e., those who received unemployment from previous weeks) increased by less than half a million, even as millions more lost their jobs. These numbers suggest that as the economy reopens, almost as many people might have returned to work as have lost jobs during the past week. Between the federal programs protecting employment and the reopening, jobs appear to be having a faster rebound than expected, which should have a significant positive effect going forward.

Federal stimulus. With the job market damage moderating, the federal aid is also mounting. As you can see in the chart below, the federal stimulus programs are now putting substantial amounts of cash into the economy. These funds should keep mitigating the damage and encourage the reopening. 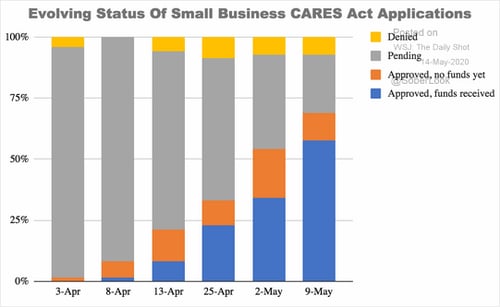 Risks remain. Although the reopening is going better than expected and is clearly having some positive economic effects, we certainly face risks as we reopen. The biggest of these is a second large wave of the pandemic. Reopening means loosening the social-distancing restrictions and exposing more people to infection risk, which could certainly inflate case counts. We have not seen that increase yet, though. If people continue to do things like wear masks and maintain distance, that additional case growth might be acceptable. That will be something we will learn, and it seems probable that most people will act in a safe manner. The real test will come in two to four weeks, when any new cases arising from the reopening will start to show up. So, we won’t really know about that risk until then.

Another potential risk is that, even with the reopening, consumers will be slow to return and spending growth will not return to what was normal any time soon. This outcome seems probable, especially in the early stages. Here again, spending growth is something that could end up doing better than expected. But early data shows that spending recovery has been fairly slow; if it continues to be slow, that will be another risk to the recovery.

Markets Have Started To Reassess

For the financial markets, these risks are starting to come into focus. Until very recently, the reopening was a ways away, and the markets’ assumption was that the reopening and recovery would go well and quickly. Now that the reopening is underway, markets are reassessing those cheerful assumptions, and we are seeing some volatility. That volatility is likely to continue over the next several weeks, until we get some data as to how bad a second wave of infections will be and how consumers return to spending. The good news is that when we get that data, markets will have a much firmer foundation.

The real takeaway from this past week is that progress continues, to the point that reopening now looks quite possible. We are not yet out of the woods, and there are certainly significant risks going forward—with a second wave of infections being the biggest. But the thing to keep in mind is that many of the biggest risks are moving behind us. It has been a good week.